Scotland Hour took part in Social Media Week Glasgow on Wednesday 26th September, in a session called, “How To Grow Your Idea Online”. 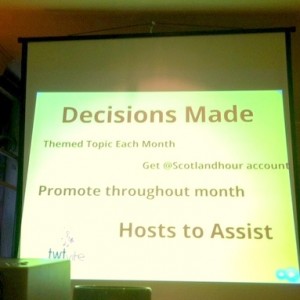 Mark Calpin of Holiday Inn Express Hamilton (or better known to our Twitter friends as @HIEHamilton) gave a presentation on Scotland Hour: How To Grow Your Idea Online to demonstrate how the #Scotlandhour phenomenon had grown from an original idea by Douglas Baird (@Bairdtravels) , how it had gained momentum, how people had got hold of the concept on Twitter and got involved and where we were now.

It was great to see some loyal #scotlandhour supporters from the tourism sector whom we already knew, however it was also interesting to see some new tourism businesses who were just starting out there to find out more about #scotlandhour. They were keen to see how they could get involved and how they could use Twitter to engage with the business community as well as tourism consumers and travellers. It was also encouraging to see others perhaps not directly involved in the tourism community but who were interested in the #scotlandhour concept and the idea of growing an idea via social media, principally in our case, Twitter.

There was a useful discussion on where we could go from here with #scotlandhour: should we change our monthly themes instead to coincide better with traveller’s holiday planning? For example, instead of waiting till the end of January to discuss Hogmanay and New Year celebrations, should we be targeting how travellers plan in advance for specific periods such as Christmas, Easter, New Year in Scotland? 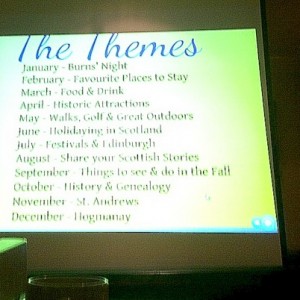 We also touched on the fact that to date, #scotlandhour had been really well adopted by the travel trade, Scottish businesses, organisations and individuals, which is very important to extend its reach, but the monthly chat still seemed to be more a business to business focused chat rather than a traveller chat – how could we encourage more of the travelling public to get involved and use #scotlandhour as a resource on Twitter?  Others commented that depending on the market they were trying to target or work with, for example, the student market, other platforms had been easier to engage their customers on to date  – such as Facebook and Instagram – rather than Twitter and that these types of consumer conversations on Twitter were also still hard to achieve. 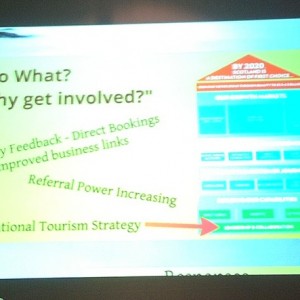 We also talked about extending the life of the content generated by #scotlandhour and this came through in our survey too. What tools can we use to best archive the tweets from each month and capture them as a resource so that we can extend or capitalise on the content created by contributors, not only each month at the one-off evening event, but throughout the month, as SH contributors continue to tweet and use the #scotlandhour hashtag to highlight news to others?

Scotland Hour has already influenced what Mark called “the tribute acts”, such as #Yorkshirehour and a business to business Twitter hotel chat set up by Mark and his hotel group, #BDLhour – so it’s great to see the #scotlandhour idea being adopted elsewhere by others and developed. 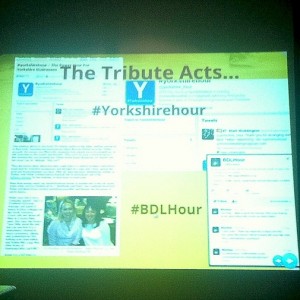 The Scotland Hour tweet chat focusing on Autumn as a theme which took part on the same evening of Wednesday 26th September, from 9-10pm was a particularly lively one, generating a reach on the night of 22, 408 accounts. On checking this around 10am the next morning, the chat had reached 34, 643 accounts with an exposure of over 66,000 impressions. Tweets were coming from all over the place – Glasgow, Edinburgh, Loch Lomond, Highlands, Fife, Borders, Argyll and Bute, Perthshire and beyond.

In his presentation, Mark included some of the data and feedback from the Scotland Hour survey which we carried out from May – July 2012 and it’s clear from the feedback that so far SH has harnessed great energy, participation, enthusiasm and a real passion for promoting and celebrating the best of Scotland. Many contributors share the same concerns (how do we reach the general public? How can we do more with the content generated? How do you keep up with all the tweets in one hour? Should we organise the session into a Q&A type chat?) and there was some great feedback and ideas for the future. We do plan to share the feedback so please keep in touch with us.

If you have any further feedback or suggestions and  ideas that you wish to share regarding Scotland Hour, you can tweet any of the SH team using the #scotlandhour hashtag – find them and more info on #scotlandhour founder Dougie Baird’s Scotland Hour site.

If you haven’t taken part yet but you’re interested, check out the #scotlandhour hashtag and join in – help us to keep growing the idea.